Plasma Cell Myeloma
Plasma cell disorders are B-cell neoplasms composed of plasma cells or lymphocytes that secrete a monoclonal immunoglobulin (Ig) or Ig fragment. They are responsible for about 15% of deaths caused by lymphoid malignancies in the US. The monoclonal Ig, usually identified by serum or urine protein electrophoresis, is known as the M component. Sometimes the M component consists of only light chains or heavy chains. Free light chains are referred to as Bence-Jones proteins when they are excreted in urine. The WHO Classification (2008) of plasma cell neoplasms includes the following:

Monoclonal Gammopathy of Undetermined Significance (MGUS): MGUS refers to an asymptomatic patient with an M component (<3 gm/dl) in their blood. It is the most common plasma cell disorder and is seen in about 5% of individuals >70 years of age. About 1% of MGUS patients per year develop multiple myeloma, amyloidosis, macroglobulinemia, or other lymphoproliferative disorder. The median interval between the diagnosis of MGUS and the development of malignancy is about 10.5 years.

Solitary Plasmacytoma: About 3% to 5% of patients with plasma cell disorders present with solitary bone or soft tissue mass. An M component may be found in serum or urine in a small percentage of cases. Solitary bone plasmacytoma slowly progresses to multiple myeloma in most cases. Extraosseous plasmacytomas involve lungs, nasopharynx, oropharynx, or nasal sinuses and can often be cured by resection.

Immunoglobulin Deposition Diseases: This group includes primary amyloidosis (PA) and light- or heavy- chain deposition disease. Immunoglobulins are deposited in various tissues eventually leading to organ failure. About 20% of PA patients have multiple myeloma (MM). The remainder don't meet the criteria for MM but have a small M component and increased plasma cells in bone marrow. 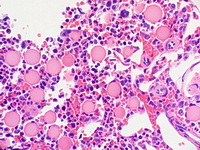 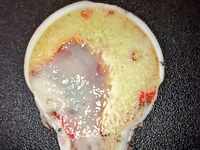