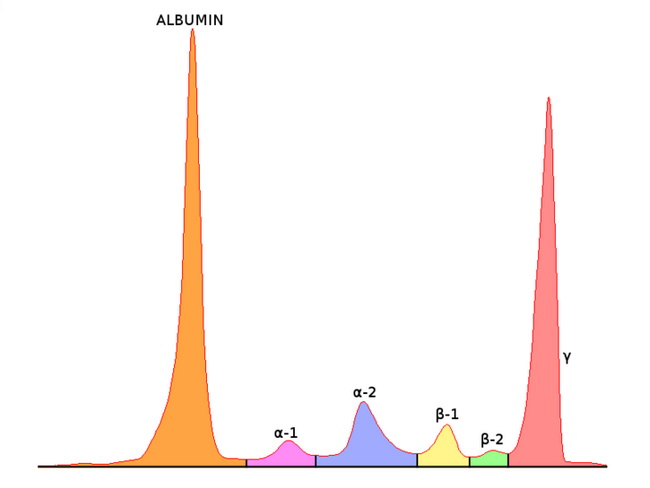 Comments:
Serum protein electrophoresis is used to screen for monoclonal immunoglobin in patients suspected of having a plasma cell disorder. The serum from a patient with plasma cell myeloma shows a sharp band (M component) in the gamma region instead of a blush or a smear as depicted in this graphic. The M component is then further characterized by immunofixation technique in which it is allowed to react with specific antisera (heavy chains IgG, IgA, IgM, IgD, IgE; light chains kappa and lambda). The most frequently found M component is IgG (about 50% of cases) followed by IgA (20%), light chains only (20%) and rare cases (1%-2%) of IgD, IgE, IgM, and biclonal myelomas.. The total immunoglobulin level is increased due to the M component, whereas the normal polyclonal immunoglobulins and albumin levels may be decreased. With immunofixation electrophoresis, an M component can be identified in serum or urine in almost 97% of plasma cell myelomas. The M component may not be detectable in non-secretory myelomas (3% of cases) as well as in IgD, IgE, and light chain-producing myelomas where the levels may be below detection threshold. Image source: Simon Caulton - Own work, CC BY-SA 3.0, Original Source is here.