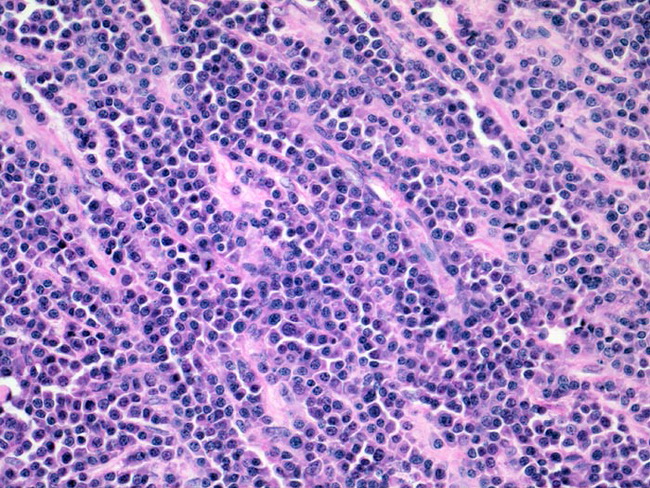 Comments:
Conventional cytogenetics and molecular cytogenetics (using FISH) reveal abnormalities in 30% and 90% of multiple myelomas respectively. They include both structural and numerical abnormalities of chromosomes and range from trisomies, partial or complete deletions, and translocations. Translocations involving immunoglobulin heavy-chain locus at chromosome 14q32 are found in between 55% and 70% of myelomas. A number of proto-oncogenes, including cyclin D1, cyclin D3, and FGFR3 are involved as partner genes with the IgH locus. Partial or complete deletion of chromosome 13 (13q14) is found in about 40% of myelomas and 70% of plasma cell leukemias by FISH. Del 17p involving P53 tumor suppressor gene is associated with poor prognosis. Acquisition of MYC rearrangements have been associated with progression to plasma cell leukemia – a highly aggressive variant. K-ras mutations are seen in 30% to 40% of cases and are considered to be early events in disease progression.