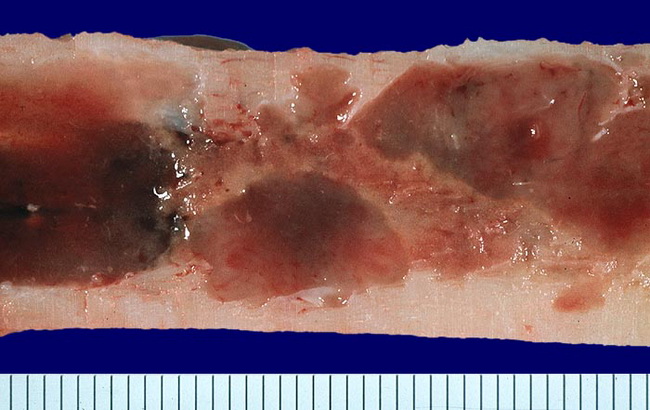 Comments:
One of the pathologic hallmarks of plasma cell myeloma is destructive lesions involving bones of the axial skeleton. These lytic lesions are mediated by a complex interplay between factors secreted by neoplastic plasma cells. One such mediator is MIP1 alpha which, after a series of complex interactions, upregulates osteoclastic activity. At the same time, the tumor cells also synthesize modulators of the Wnt pathway that are suppressors of osteoblastic activity. The end result is increased bone resorption which increases the risk of pathologic fractures and also causes hypercalcemia. The image shows lytic lesions filled with gelatinous tumor in the femur of an 80 y/o female with plasma cell myeloma. Note the erosion and irregular thinning of the cortex (top right) which predisposes to pathologic fractures. Image copyright: pathorama.ch