Mantle Cell Lymphoma
Introduction: Mantle cell lymphoma (MCL) is an aggressive B-cell lymphoma that makes up about 2.5% of non-Hodgkin lymphomas in the US. It usually presents at advanced stages in the 5th and 6th decades of life with generalized lymphadenopathy and bone marrow involvement. There may also be involvement of peripheral blood, spleen, liver, gastrointestinal tract (lymphomatoid polyposis), Waldeyer's ring, lung, and pleura.

Immunophenotype: MCL expresses CD19, CD20, CD43, surface Ig (usually IgM and IgD) with light chain restriction, FMC-7, and bcl-2. Cyclin D1 is strongly positive. It is CD5+ and CD23- which helps to separate it from CLL/SLL. CD5 expression is sometimes weak or absent in MCL. CD10 and bcl-6 are usually negative.

Genetics: Most cases show t(11;14)(q13;q32) involving the IGH locus on chromosome 14 and CCND1 (cyclin D1) locus on chromosome 11 leading to overexpression of cyclin D1 which promotes cell proliferation. The translocation can be detected by karyotyping in about 70% of cases and by FISH in almost 100% of cases. The blastoid variant may show TP53 mutations, MYC translocation t(8;14)(q24;q32), and tetraploidy. These are associated with aggressive behavior. 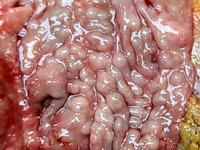