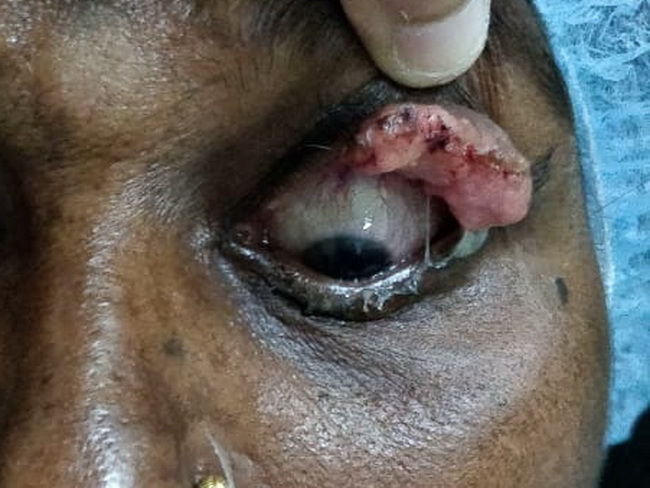 Comments:
Introduction: Sebaceous carcinoma is a rare malignancy that is seen in periocular region (75% of cases, given the abundance of sebaceous glands in and around the eye) and extraocular regions (comprising the remaining 25% of cases). The periocular variant was believed to be more aggressive than the extraocular variant but recent studies have shown no difference in overall survival between the two groups.

PERIOCULAR VARIANT: Sebaceous carcinoma is the most common malignancy of the eye after basal cell carcinoma and squamous cell carcinoma. The median age at diagnosis is in sixties and it is more common in Asians. The usual location is in association with Meibomian glands of the upper eyelid. It presents as a slowly growing non-ulcerated nodule that is clinically often mistaken for basal cell carcinoma, chalazion, or chronic blepharoconjunctivitis.

EXTRAOCULAR VARIANT: The extraocular variant makes up about 25% of all cases of sebaceous carcinoma. The most common location is head and neck. Less frequently it involves the trunk, thigh and genitalia. The median age at diagnosis is 7th decade. It presents as a slow-growing firm nodule which may be ulcerated.

Case History: This middle-aged female presented with a 6-month history of progressive swelling of left upper eyelid. There was pain and discharge over the last 2 months. Examination showed a 2.5 x 2.0 x 1.5 cm elevated nodular lesion on the inner and lateral aspect of her eyelid. The lesion was excised. Microscopic examination showed sebaceous carcinoma.