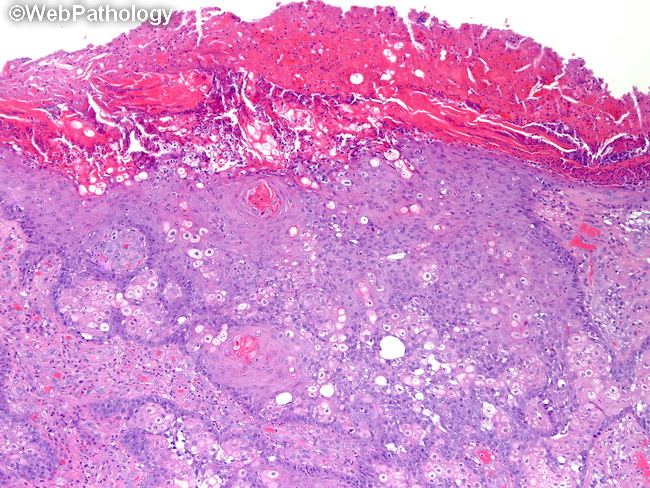 Comments:
Rare cases of sebaceous carcinoma have been reported in noncutaneous sites such as oral cavity, bronchus, parotid and submandibular glands, uterine cervix, and dermoid cysts of the ovary. The origin is presumed to be ectopic sebaceous glands. Some cases occur in the setting of xeroderma pigmentosum, Bowen's disease of the vulva, immunocompromised status in organ transplant recipients and HIV-patients, and nevus sebaceus. Like other sebaceous neoplasms, sebaceous carcinoma (especially the extraocular variant) may be associated with Muir-Torre syndrome. The presentation tends to be at a younger age than non-syndromic cases.

The tumor is composed of a haphazard mixture of basaloid germinative cells and smaller numbers of more mature-appearing sebaceous cells in irregular lobular, trabecular, or diffuse sheet-like growth patterns. The basaloid cells have round or oval vesicular nuclei, punctate nucleoli and brisk mitotic activity. Comedonecrosis is often present. There may be perineural and lymphatic/vascular invasion. Poorly-differentiated cases are composed almost entirely of pleomorphic basaloid cells and have only rare foci of lipid-containing differentiated sebaceous cells. Some cases show prominent keratinization (as seen here) which may lead to diagnostic confusion with squamous cell carcinoma.