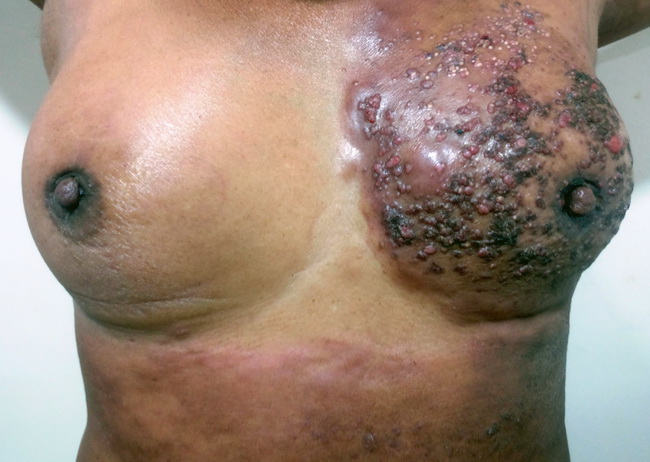 Comments:
Carcinoma en cuirasse (CEC) is an uncommon form of cutaneous metastases with a distinctive clinical presentation. The primary site is usually breast and, less commonly, lung, gastrointestinal, or genitourinary tract. Breast cancer frequently metastasizes to the overlying skin (5%-10% of all cases); CEC accounts for 3% to 6% of these cases.

CEC is most often a local recurrence of previously treated breast cancer. In some cases, it is the initial presentation of an untreated, neglected disease. Cutaneous involvement in breast cancer may be expressed in other forms besides CEC, including inflammatory breast carcinoma, papulonodular lesions, alopecia neoplastica, and Paget disease.

CEC initially presents with erythema and pitting edema of the skin overlying the breast. Over time, papules, plaques and nodules appear which coalesce to form leathery or woody induration of the skin. There may be pruritus, bleeding, or foul-smelling discharge. The term "en cuirasse" is a french term which refers to its resemblance to breastplate armor worn by medieval warriors.

The differential diagnosis includes morphea, chronic radiation dermatitis, and keloids. Biopsy of a nodule will resolve the diagnosis. High-grade malignant cells are easily identified in a densely fibrotic stroma.

CEC represents late stage cancer and carries poor prognosis. Given the degree of fibrosis, the tumor is resistant to chemotherapy. Treatment is aimed mostly at palliation. Topical steroids, intralesional chemotherapy, and radiation have all been used with limited success.

See Case History in the next image.