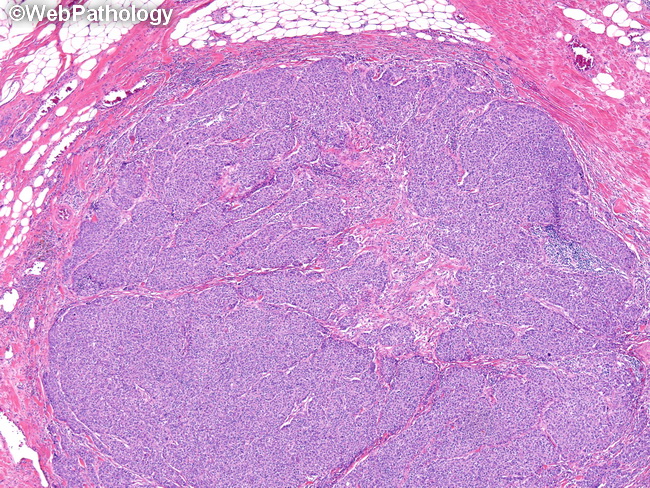 They show high expression of proliferation-associated genes. The term basal-like refers to their expression of high molecular weight cytokeratins such as CK5, CK5/6, CK14 and CK17 that are mainly expressed by myoepithelial or basal layer of ducts and acini in the breast. The myoepithelial markers such as calponin, CD10, maspin, muscle-specific actin, p63, p75, p-cadherin, SMA, and SMM-HC are usually negative in these tumors. EGFR is expressed.

There is no consensus yet as to which markers must be present to meet the definition of basal-like carcinoma. An immunohistochemical profile that is triple negative (neg. for ER/PR/HER2), CK5/6 +ve, and EGFR+ve has a very high specificity (and about 75% sensitivity) for basal-like breast cancers. Pure basal-like immunophenotype is quite rare. Most cases express luminal keratins as well as basal cytokeratins.