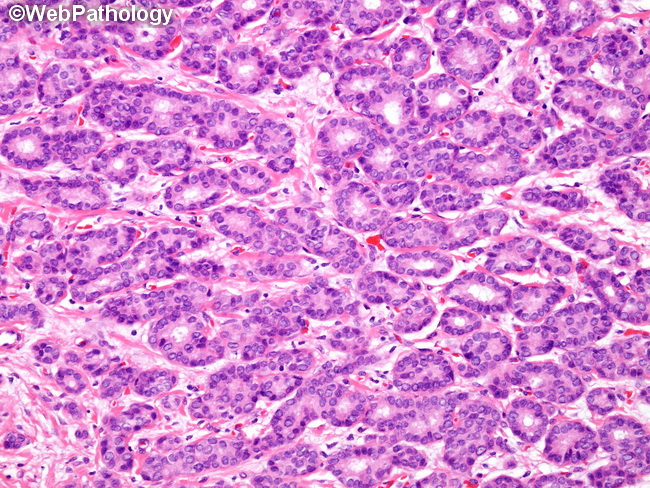 Comments:
The major drivers of breast cancer pathogenesis are hormone receptor-related genes, HER2 cluster of genes, and proliferation-associated genes. Based on the similarities of gene expression profiles using a hierarchical clustering, breast cancer has been subdivided into luminal A, luminal B, HER2-enriched, and basal-like subtypes.

These groupings have prognostic implications. Broadly speaking, luminal subtypes show expression of estrogen receptor (ER)-related genes and have better prognosis than HER2-enriched and basal-like subtypes, which are usually ER negative.

Luminal A is the most common luminal subtype and accounts for about 40% of all breast cancers. It shows high expression levels of ER-related genes, low expression of HER2 cluster and proliferation-associated genes. They have low histologic grade (as evidenced in this image) and better prognosis than luminal B subtype. They respond well to endocrine therapy e.g. anti-estrogen or aromatase inhibitors.

With regards to mutational profiling, the luminal subgroups are the most heterogenous and show the lowest rates of significantly mutated genes. The most commonly seen mutations in luminal A include PIK3CA (45%), followed by MAP3K1, GATA3, TP53, CDH1, and MAP2K4.