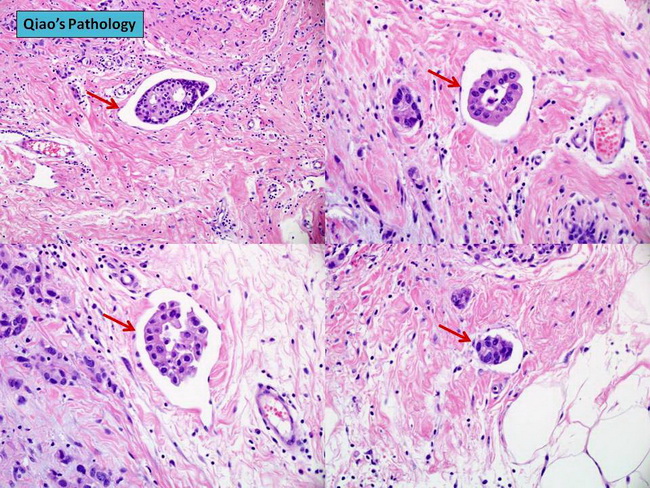 Comments:
CRITERIA: The foci of lymphovascular invasion should be peritumoral and not intratumoral to be considered clinically significant. Lymphatics lack supporting smooth muscle or elastic lamina and are lined by endothelial cells. The larger lymphatic channels are found adjacent to arteries and veins. They usually do not contain blood. Lymphovascular invasion must be separated from retraction artifact. If endothelial cells are not present, it most likely represents retraction artifact. If the tumor embolus matches precisely with the shape of the space in which it is found, it is again more likely to represent retraction artifact. The shrinkage artifact is caused by inadequate formalin fixation which leads to suboptimal processing. It is more commonly seen in high-grade ductal carcinoma than in lobular carcinoma. Another diagnostic pitfall is invasive ductal carcinoma involving areas of pseudoangiomatous stromal hyperplasia mimicking lymphatic invasion.

USE OF IMMUNOSTAINS: The use of endothelial markers such as CD34 and CD31 to identify lymphatic spaces can sometimes produce misleading results. These stains may highlight myofibroblasts lining artifactual spaces and create resemblance to lymphovascular invasion. More recently, D2-40 antibody against podoplanin has been used to identify endothelium-lined lymphatic spaces (D2-40+/CD34-/CD31-). Blood vessels have the opposite phenotype (D2-40-/CD34+/CD31+). Antibodies against endothelial hyaluronan receptor 1 (LYVE-1) have also been used in identifying lymphatic vessels containing tumor emboli in breast carcinomas. The endothelial markers such as D2-40, LYVE-1, Fli-1, ERG, CD34, and CD31 may be used for identifying or confirming lymphovascular invasion in a given case of breast carcinoma; however, their routine use is not recommended at this time. The immunohistochemical findings must always be interpreted in the context of an H&E-stained section.

PROGNOSTIC SIGNIFICANCE OF LYMPHOVASCULAR INVASION: Tumor emboli in peritumoral lymphatics are found in approximately 15% of invasive ductal carcinomas on routine H&E sections. The percentage of cases with tumor emboli in lymphatics goes up if immunostains for endothelial markers are used. The vast majority of these patients with lymphovascular invasion also have axillary lymph node metastases; however about 5-10% of patients in this group will have negative lymph nodes. The presence of tumor emboli in peritumoral lymphatics is associated with adverse prognosis in node-negative patients treated by mastectomy or breast-conserving surgery. There is a greater risk of recurrences, metastases, and dying from breast cancer in those with lymphatic tumor emboli as compared to those without this finding. Studies have found no link between the number of foci of lymphovascular invasion and the risk of recurrence or shortened survival. In patients with axillary lymph nodes metastases, the effect of lymphatic tumor emboli on the prognosis is uncertain. Some studies have found no significant effect on disease-free survival, whereas others have found it to be prognostically unfavorable.

slide 61 of 61
Tweets by @WebPathology