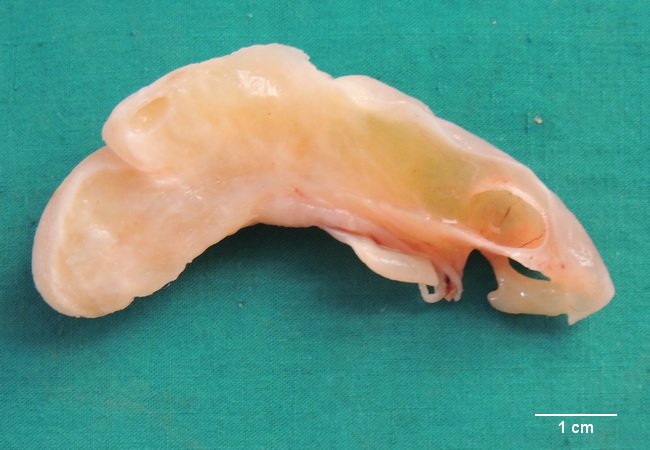 Comments:
Antrochoanal polyp is a distinctive subtype of inflammatory nasal polyp that makes up 3%-6% of all sinonasal polyps. It is more common in men and usually occurs in teenagers and young adults. The patients often give history of bilateral maxillary sinusitis and/or allergies.

It arises in the maxillary sinus and extends via its ostium into the nasal cavity. In some patients, it may extend posteriorly into the nasopharynx and present as a nasopharyngeal mass or extend into the oropharynx. Antrochoanal polyp may be associated with and is clinically indistinguishable from other sinonasal polyps.

Gross features are described in the case history given below. Microscopically, antrochoanal polyps are lined by respiratory mucosa with the underlying stroma frequently showing degenerative and reactive changes. Surface ulceration and squamous metaplasia are common. The stroma shows fibroblastic cells, atypical stellate cells as well as inflammatory cells in a myxomatous background.

Secondary changes including hemorrhage, necrosis, vascular thrombosis, and papillary endothelial hyperplasia-type changes within organizing thrombus may be present. Bone erosion along the medial wall of maxillary sinus secondary to hemorrhage and reactive changes may raise the concern for a malignancy on radiographic studies.

Antrochoanal polyp must be distinguished from nasopharyngeal angiofibroma and vascular neoplasms such as hemangioma and angiosarcoma. Treatment consists of complete resection along with its stalk.

This specimen of antrochoanal polyp is from a 22 y/o male with history of recurrent sinusitis who presented with breathing difficulty due to nasal obstruction. On examination, a polypoidal mass in the right nostril protruding into the nasopharynx was noted. The specimen measured 9 x 3 cm and had pink-tan, lobulated smooth external surface. The cut surface (shown here) was translucent and had gelatinous or mucoid appearance. The histologic features were consistent with an inflammatory polyp.

slide 4 of 4
Tweets by @WebPathology