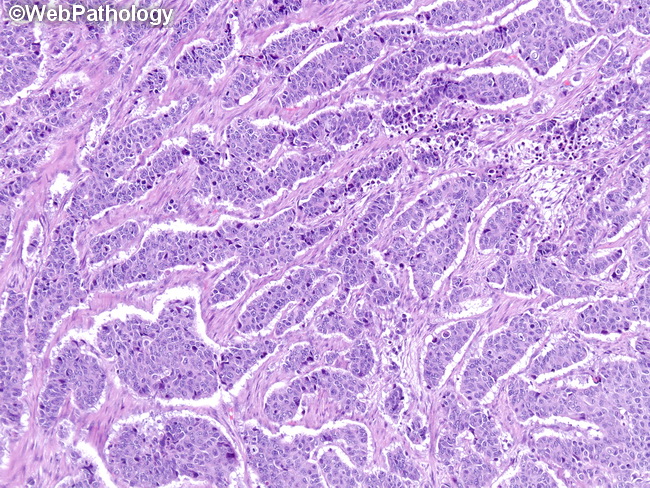 Comments:
Colorectal neuroendocrine carcinomas (NECs) and mixed adenoneuroendocrine carcinomas (MANECs) are aggressive tumors with generally poor outcomes. The patients are often younger (median age at diagnosis is 55 years) than those with colorectal adenocarcinoma. The disease usually presents at an advanced stage. Almost two-thirds of patients have metastasis at the time of diagnosis. The treatment usually consists of a combination of surgery and platinum-based chemotherapy. There is no difference in survival between NECs and MANECs. Median survival for localized disease and metastatic disease is around 24 months and 8 months respectively. Features associated with favorable prognosis include peritumoral lymphocytes, microsatellite instability, and large cell phenotype. On the other hand, CD117 positivity and lymphovascular invasion are adverse prognostic factors. The image shows large cell neuroendocrine carcinoma of cecum with tumor cells arranged in nests, ribbons, and trabeculae.