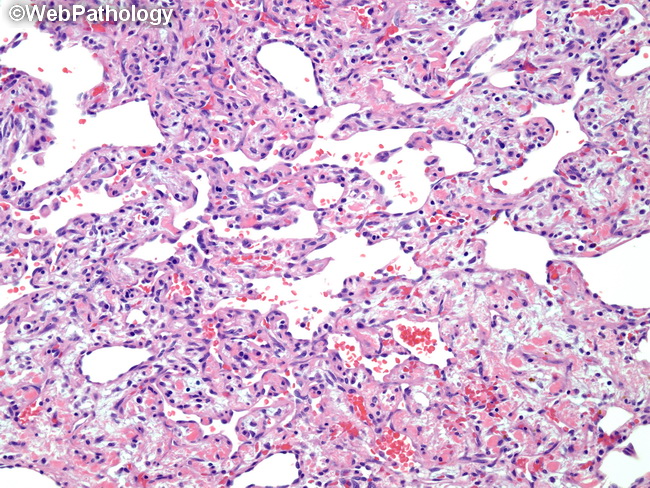 Comments:
Microscopic Features of Cardiac Angiosarcomas are similar to those seen in other locations. Most cases show an admixture of solid areas (with little or no vasoformative activity) and anastomosing vascular spaces (shown here). The solid areas are composed of atypical spindle or epithelioid cells with hyperchromatic pleomorphic nuclei. The anastomosing vascular channels are lined by endothelial cells with varying degrees of atypia. In some areas, the proliferating endothelial cells and fibrinous hyaline material form tufts and papillations that project into the vascular lumens. The solid areas may not show much vasoformation; however, individual cells may have intracytoplasmic vacuoles containing red blood cells. Mitotic activity is increased, including atypical forms. Multinucleated giant cells, bizarre hyperchromatic nuclei, and necrosis may be present. In some areas, the abnormal vascular channels may be seen infiltrating into the adjacent myocardium. Like angiosarcomas in most locations (except breast), histologic grading is not recommended for cardiac angiosarcomas. They tend to be aggressive regardless of the histologic findings.