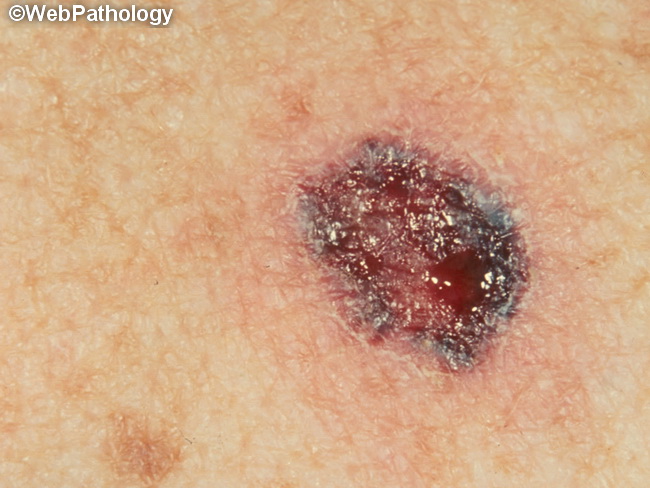 Comments:
Superficial spreading melanoma is the most common subtype accounting for almost 70% of all cutaneous melanomas. It can occur anywhere on the body but has a predilection for lower leg in females and upper back in males. They usually have a flat or slightly elevated surface than the surrounding uninvolved skin, irregular margins with indentations, notches or scalloping, and variable pigmentation. The color ranges from tan, pink, white, brown, blue, and black. The lighter tan or pink areas in a deeply pigmented lesion usually correspond to foci of spontaneous regression. The amelanotic variants are flesh-colored or appear erythematous. If one or more elevated firm blue-black nodules appear on the surface, it usually indicates the development of deep dermal invasion. The appearance of bleeding and ulceration in a melanoma (as seen in this image) indicates a rapidly growing tumor with potentially poor prognosis. Any recent and/or rapid change in the appearance of a preexisting lesion should always raise concern about a newly developing melanoma.