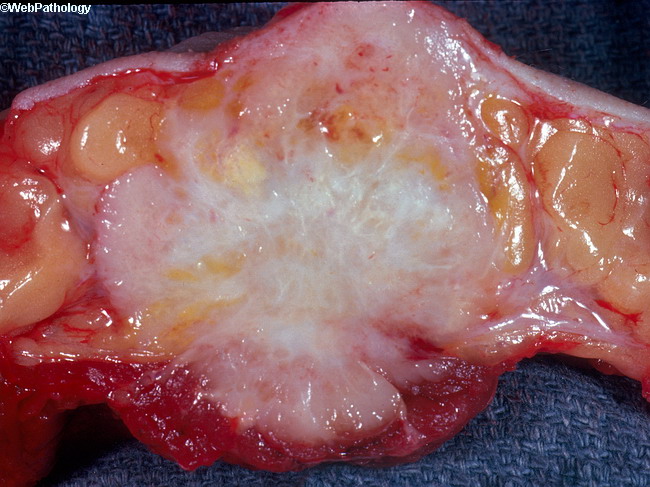 Comments:
Gross Pathology: Invasive ductal carcinomas usually form a solid mass with a variable consistency. Tumors with abundant desmoplastic stroma are firm to hard and gray-white in appearance. The presence of microcalcifications may impart a gritty consistency. There may be yellow-white streaks of necrosis and foci of hemorrhage. Extensively necrotic tumors may develop cystic change. The tumors that are composed largely of neoplastic and inflammatory cells without much stroma tend to be soft and fleshy and bulge when they are sectioned. The tumors can have an irregular or stellate outline with indistinct borders, a nodular configuration with well-circumscribed contours, or an admixture of the two patterns. The stellate tumors often show gray-white strands of tissue radiating into the surrounding fat. Grossly circumscribed tumors may still show invasive growth pattern microscopically. The tumor shape has prognostic implications. According to some investigators, infiltrative carcinomas (with grossly stellate appearance) tend to be larger when detected, more likely to have necrosis, more frequently associated with axillary lymph node metastasis, and have poor prognosis when compared to circumscribed tumors.