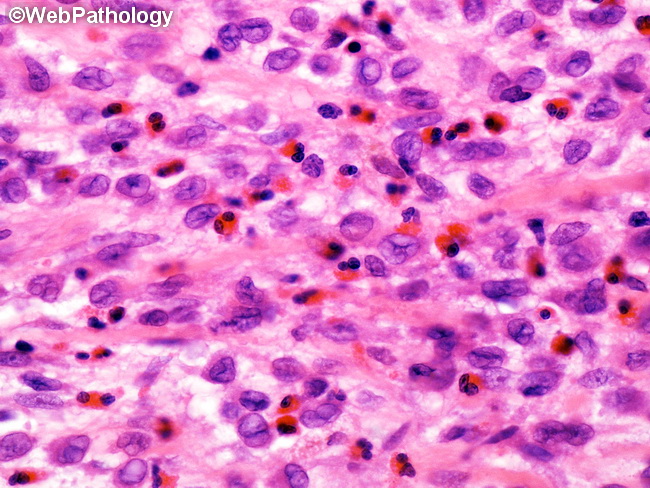 Comments:
Langerhans Cell Histiocytosis (LCH) - Microscopic Features: The cornerstone of diagnosis is the presence of a uniform population of Langerhans cells. They are 15-25 microns in size, round or oval, with moderate amount of lightly eosinophilic cytoplasm and indistinct cytoplasmic borders. The nuclei lack atypia and have a distinctive complex, folded, indented or grooved appearance (coffee bean nuclei). The nuclear chromatin is finely dispersed and nucleoli are not prominent. There is variable mitotic activity and atypical forms are not seen. Bi- or multinucleated cells with similar nuclei may be present. Langerhans cells may show spindled morphology in rare cases.

The background consists of variable number of eosinophils; however, they may be entirely absent or so numerous as to produce eosinophilic microabscesses with central necrosis and Charcot-Leyden crystals. Small lymphocytes, neutrophils, histiocytes, and multinucleated osteoclast-like giant cells (especially in bone) may be present. Plasma cells are rare.