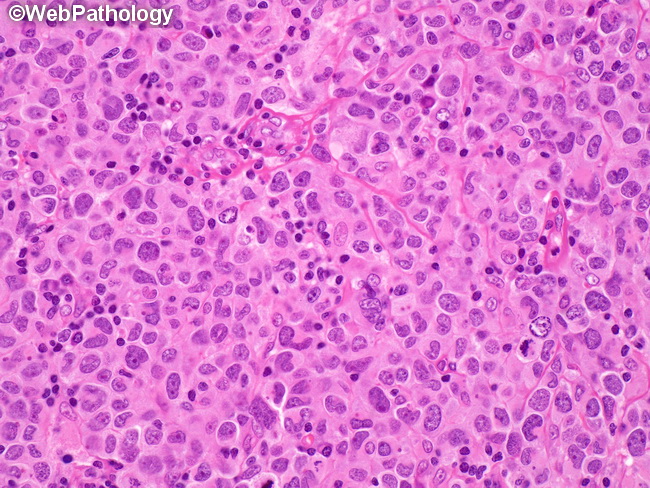 Comments:
Introduction: Anaplastic large cell lymphoma (ALCL) is a subtype of T-cell lymphoma composed of large pleomorphic cells that show positivity for CD30 antigen and loss of most T-cell markers. Most cases carry t(2;5) translocation involving the anaplastic lymphoma kinase (ALK) gene resulting in expression of a chimeric protein containing the cytoplasmic portion of ALK. It has been previously referred to as Ki-1 lymphoma.

ALCL can be subdivided into three distinct clinicopathologic entities: 1) primary systemic ALCL, ALK positive; less aggressive and potentially curable. 2) primary systemic ALCL, ALK negative; more aggressive than ALK-positive. 3) Primary cutaneous ALCL; indolent behavior. An unusual form of ALCL, ALK-negative arises within the breast in association with breast implants. ALCL must be distinguished from other B- and T-cell lymphomas with anaplastic cells that may or may not express CD30.

ALCL comprises about 3% of all non-Hodgkin lymphomas and 10-20% of childhood lymphomas. ALK-positive ALCL is usually seen at the age of 10-15 years and the vast majority of cases are seen within the first three decades. There is slight male predominance.