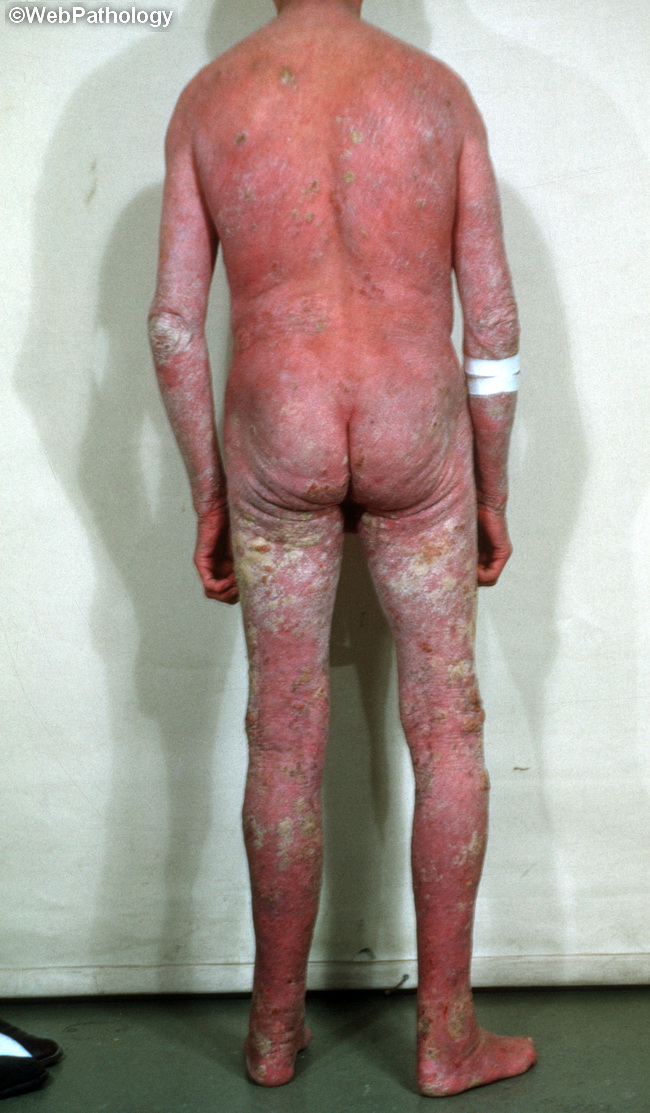 Comments:
Pathogenesis of Mycosis Fungoides (MF): The precise pathogenesis of MF is unknown. There is no convincing evidence of genetic predisposition. Familial cases are rare. Higher risk of MF has been associated with certain professions/industries, including farming, painting, woodworking, carpentry, textiles, ceramics, petrochemicals and metal industries. Long-term exposure to an irritant or an infective agent may have a role in its pathogenesis. The role of many viral and bacterial agents has been investigated but no conclusive evidence has been found to date.A variety of cytogenetic abnormalities have been detected in MF. They include deletions of chromosomes 1p, 17p, 10q, 13q, and 19, as well as gains of 4/4q, 17q/17, and 18; however, none are specific for MF. The progression from plaque to tumor stage appears to be related to altered functions of tumor suppressor and apoptosis-related genes such as p15, p16, PTEN, and p53. Recurrent mutations have also been detected in genes involved in epigenetic regulation, T-cell receptor signaling, tumor necrosis factor signaling pathway, JAK-STAT signaling pathway, and NF-KB pathway. Mutations in Fas gene have been documented in MF. This may protect the tumor cells from Fas-mediated apoptosis. Cytotoxic T-cell induce apoptosis via engagement between Fas (expressed on the surface of the target cells) and Fas ligand (FasL). Defects in FasL signaling result in protection against tumor-specific cytotoxic T-cell-mediated immunity. The image shows erythematous, scaly and eczema-like crusted patches and plaques covering the entire body of this patient with advanced stage MF. Some of the plaques had turned nodular.