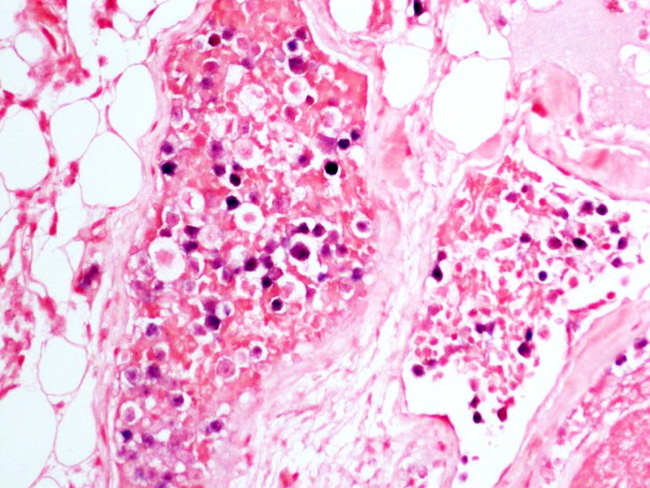 Comments:
The nuclei of primary effusion lymphoma show positivity for antibody to HHV8-associated latent protein LANA1. There is positivity for EBV-encoded small RNA (EBER) by in-situ hybridization (shown in this image). EBV LMP1 is absent. The immunophenotype of extracavitary PEL is similar to that of PEL; however, 25% of cases lack CD45 (PEL is CD45+) and express B-cell markers CD20, CD79a, and CD138 (PEL is negative for these markers). In addition, there may be aberrant expression of T-cell markers (just as in PEL). The image shows primary effusion lymphoma which presented initially as intravascular lymphoma confined to dermal vessels. Subsequently, the patient developed pleural effusion. The patient was immunosuppressed and the lymphoma was HHV8-positive and EBV-positive. Image courtesy of: Genevieve Crane, MD, PhD.