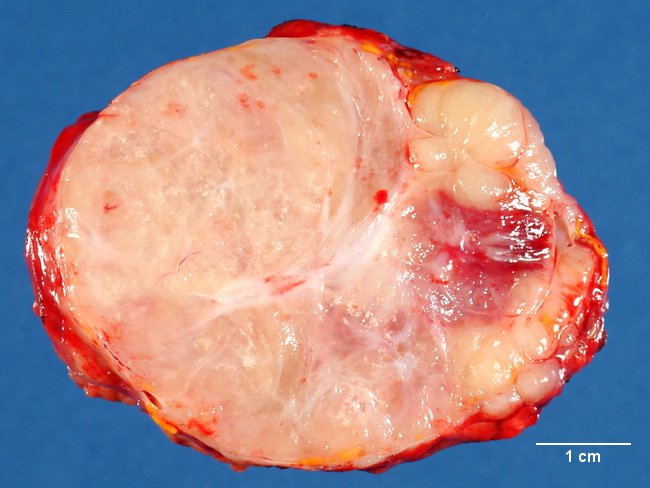 Comments:
As seen in several preceding images, neuroblastomas are bulky but relatively well-circumscribed solid tumors with a variable appearance. When arising in the adrenal, they are often surrounded partially or completely by a thin, bright yellow rim of adrenal cortex. The gross features depend upon the histologic subtype and secondary changes, including hemorrhage, necrosis, and coarse calcifications. Undifferentiated and poorly differentiated tumors have deeply hemorrhagic red color and areas of soft gray-white tissue which may be punctuated by coarse calcifications or yellow-white foci of coagulative necrosis. Extensively hemorrhagic tumors can simulate the appearance of a hematoma. Differentiating subtype of neuroblastomas (shown in this image) are tan-yellow, firm, with only limited areas of hemorrhage and necrosis. Image courtesy of Dr. Jean-Christophe Fournet, Paris, France; humpath.com; Used with permission