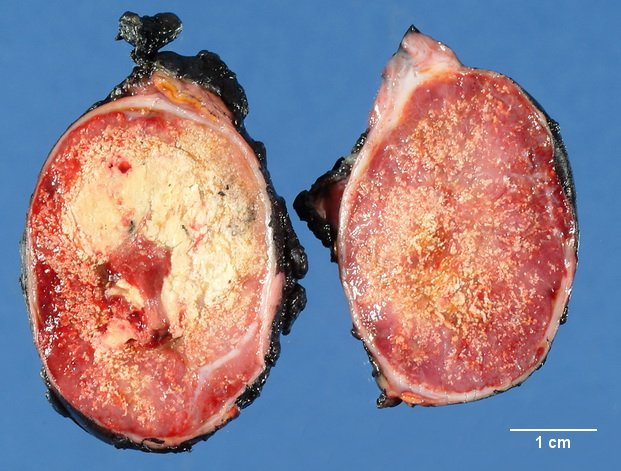 Comments:
In some cases of neuroblastoma, catecholamine release may give rise to symptoms similar to those seen in Pheochromocytoma – paroxysmal hypertension, palpitations, flushing, and headache. Cervical tumors near stellate ganglion may present with Horner syndrome (ptosis, miosis, enophthalmos). Rare patients develop paraneoplastic neurologic manifestations, including opsoclonus-myoclonus-ataxia syndrome. It believed to have an auto-immune basis and is associated with neurologic and cognitive deficits which may improve only partially following the removal of the tumor. Ironically, the patients who present with opsoclonus-myoclonus syndrome often have neuroblastomas with favorable biological features. The image shows a well-circumscribed tumor arising in the adrenal medulla. The remnant of adrenal cortex can be seen on the top in the left half of the image. The cut-surface is pink-tan with abundant coarse and punctate calcifications (yellow-white specks). Image courtesy of Dr. Jean-Christophe Fournet, Paris, France; humpath.com; Used with permission