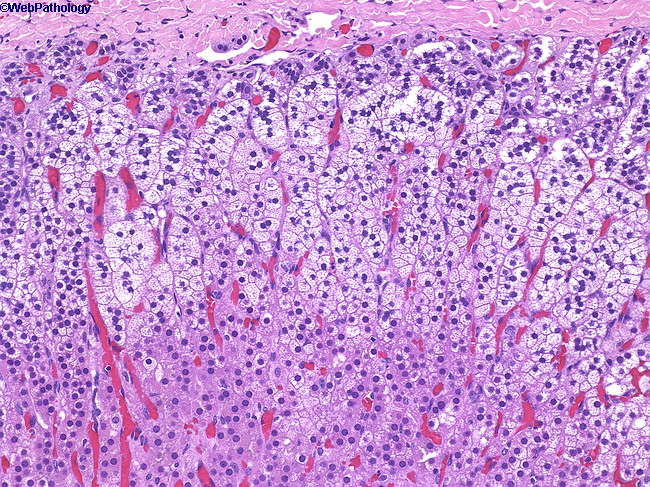 Comments:
The three zones of adrenal cortex can be better seen in this intermediate magnification view. Zona glomerulosa (just beneath the capsule) is the site of mineralocorticoid synthesis (mainly aldosterone) and responds to angiotensin and potassium levels. It makes up 10%-15% of the cortex and is composed of small compact clusters of darker parenchymal cells. The middle zone is zona fasciculata which makes up 75% of the cortex. It is composed of radially-oriented cords of pale cells with spongy-appearing cytoplasm. Zona fasciculata is responsible for synthesis of glucocorticoids (cortisol) as well as adrenal androgens. The bottom of the image shows zona reticularis - the innermost layer which makes up 5%-10% of the cortex. It is composed of anastomosing cords of polygonal cells with acidophilic granular cytoplasm. The cells of zona reticularis synthesize mainly androgens and smaller amounts of glucocorticoids.