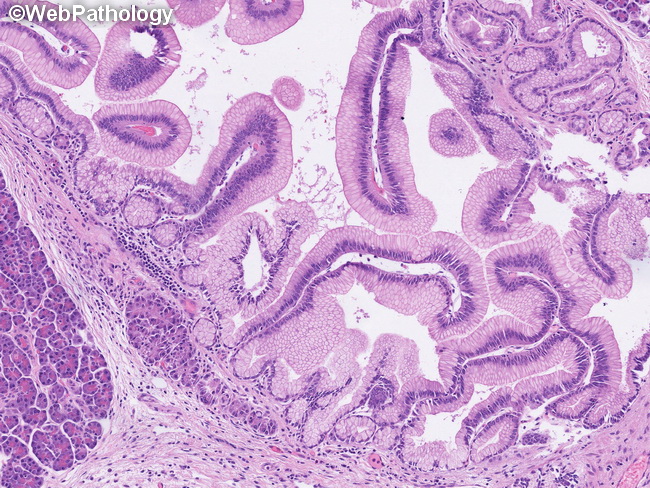 Comments:
Molecular Pathogenesis of Intraductal Papillary Mucinous Neoplasm (IPMN) of Pancreas: The exact pathogenesis of IPMN has not been elucidated. They are thought to arise from smaller pancreatic intraepithelial neoplasia lesions. KRAS mutations are seen in 60-80% of IPMNs. However, they are also found in several other pancreatic neoplasms, including ductal adenocarcinomas.

Activating mutations in GNAS have been observed in 50-70% of IPMNs, usually intestinal type. They are rarely found in pancreatic ductal adenocarcinomas. RNF43 encoding E3 ubiquitin ligase is mutated in 50% of IPMNs. Overexpression of p53 is seen in 10-40% of high-grade IPMNs and 40-60% of invasive adenocarcinomas. The invasive component also shows loss of SMAD4.