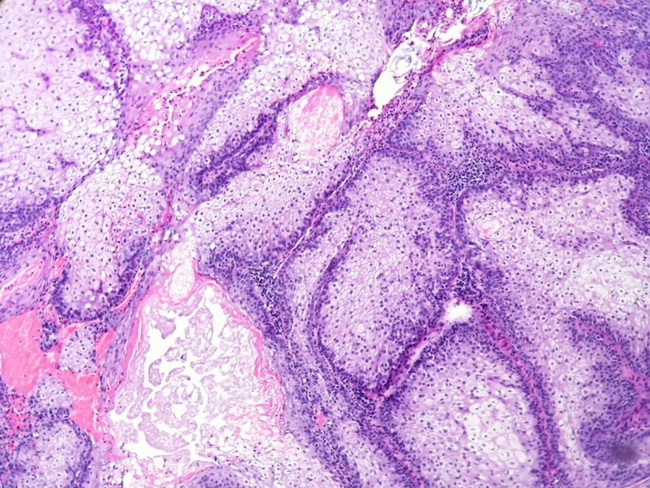 Comments:
Muir-Torre Syndrome is a subset of Lynch syndrome (HNPCC) which is associated with an inherited defect in one copy of the DNA mismatch repair (MMR) genes. When cells acquire loss-of-function mutations in their remaining normal allele, the DNA mismatch repair function is lost leading to accumulation of replication errors throughout the genome. These errors may inactivate tumor suppressor genes or activate proto-oncogenes leading to tumorigenesis.

Patients with defective mismatch repair function have varying lengths of microsatellite regions (tandem repeats of one to six nucleotides scattered throughout the genome) instead of fixed lengths found in normal individuals. This phenomenon is referred to as Microsatellite Instability (MSI) and it is seen in malignancies in about 70% of patients with HNPCC. The pathogenesis of tumors in Muir-Torre syndrome with MSI is related to dysregulation of beta-catenin and PTCH signaling pathways. Malignancies linked to MSI occur at an earlier age and are usually less aggressive than stage-matched non-MSI associated counterparts.

The major MMR genes are MLH1 (on chromosome 3p21), MSH2 (on chromosome 2p22), MSH6, and PMS2. The loss of corresponding proteins in MTS can be reliably detected with immunohistochemical stains. MSH2 expression is lost in more than 90% of patients with MTS. The detection of MSI and/or loss of MMR proteins in both the cutaneous as well as internal malignancies is highly specific for MTS.