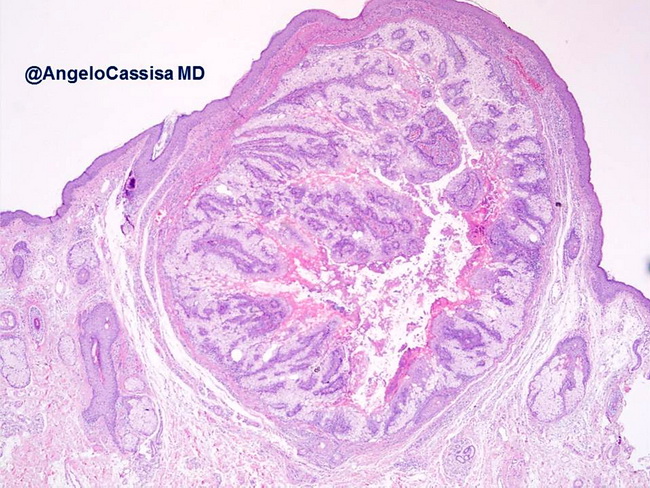 CUTANEOUS TUMORS IN MTS: The spectrum of cutaneous tumors in MTS includes sebaceous adenoma, sebaceoma, sebaceous carcinoma (especially when arising in non-facial sites), keratoacanthoma, and squamous cell carcinoma. Sebaceous adenoma, especially when multiple, is a highly specific marker of MTS. The association of sebaceous carcinoma with MTS is comparatively less frequent. The cutaneous tumors and visceral malignancies usually present concurrently; however, in some cases the cutaneous tumors may antedate by several years. Most patients are in their 5th or 6th decades.

Sebaceous tumors in MTS sometimes show peculiar histologic features that are absent in non-syndromic cases. These include cystic change (as seen in the sebaceous adenoma in this image), lack of continuity with the overlying epidermis, and keratoacanthoma-like appearance. Given their rarity, the diagnosis of any sebaceous tumor should prompt a discussion with the clinician regarding the possibility of Muir-Torre Syndrome.

INTERNAL MALIGNANCIES IN MTS: The sites of visceral malignancies in MTS include gastrointestinal tract (50%), urothelial (bladder & renal pelvis; 10%), endometrium (10%), breast (5%), and hematological (5%). Intestinal polyps are seen in between 25-30% of cases. Tumors in MTS tend to be multiple, present early, and generally behave less aggressively.