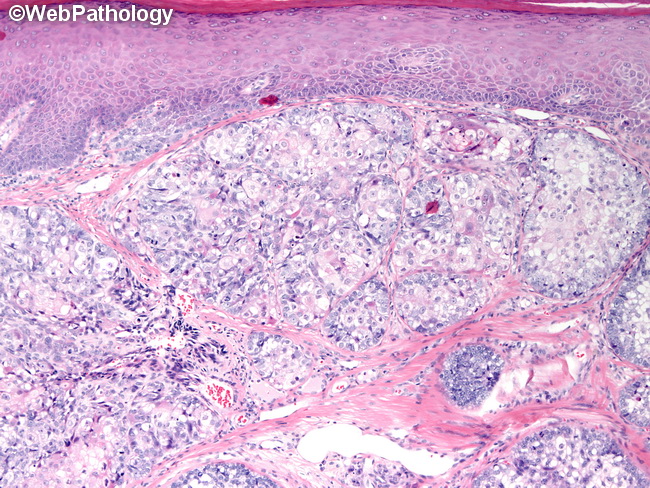 Comments:
Shave biopsy of sebaceous carcinoma of the eyelid. Sebaceous carcinoma is composed of a haphazard mixture of basaloid germinative cells and smaller numbers of more mature-appearing sebaceous cells in irregular lobular, trabecular, or diffuse sheet-like growth patterns. The basaloid cells have round or oval vesicular nuclei, punctate nucleoli and brisk mitotic activity. Comedonecrosis is often present. There may be perineural and lymphatic/vascular invasion. Poorly-differentiated cases are composed almost entirely of pleomorphic basaloid cells and have only rare foci of lipid-containing differentiated sebaceous cells. Better differentiated case, such as the one shown here, have greater number of mature sebaceous cells.

Sebaceous carcinoma is the third most common malignancy of the eye after basal cell carcinoma and squamous cell carcinoma. The median age at diagnosis is in sixties and it is more common in Asians. The usual location is in association with Meibomian glands of the upper eyelid. It presents as a slowly growing non-ulcerated nodule that is clinically often mistaken for basal cell carcinoma, chalazion, or chronic blepharoconjunctivitis.