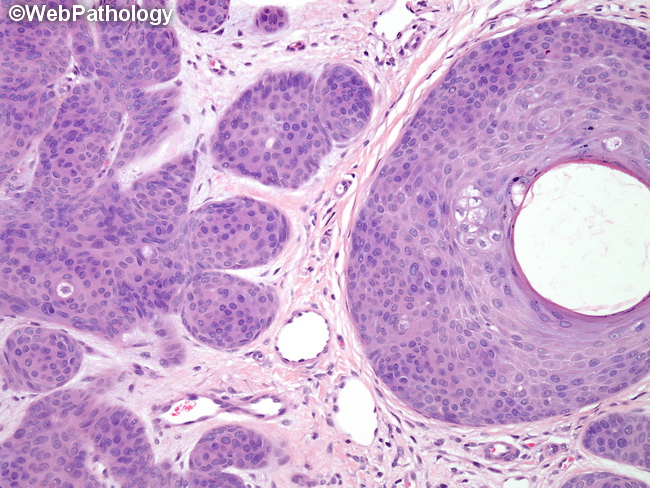 Comments:
Sebaceoma is a benign sebaceous neoplasm that may be associated with Muir-Torre Syndrome. It usually occurs as a flesh-colored nodule on the face and scalp of elderly patients and shows a female predominance (F:M=4:1). The previous terms - sebaceous epithelioma and sebomatricoma - used to describe this entity are now obsolete.

Sebaceoma consists of variably-sized lobules scattered in the dermis, often with the involvement of the overlying epidermis. The lobules lack an organized architecture and are composed of a random mixture of abundant basaloid cells and small numbers of mature sebocytes. The case shown here consists almost exclusively of basaloid cells and only rare mature sebocytes (cells with clear cytoplasm). This is in contrast to the orderly appearance of lobules in sebaceous adenomas which show a few peripheral layers of basaloid cells and inner layers of sebaceous cells (dominant cell population).