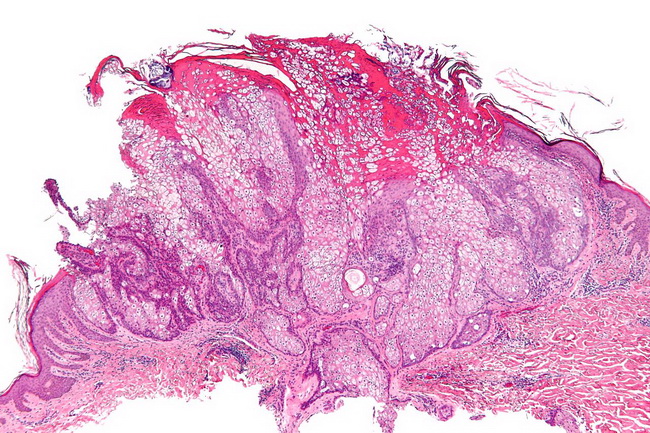 Comments:
Sebaceous adenoma is a benign sebaceous neoplasm that occurs on the face and scalp of elderly patients. It appears a small, firm nodule that clinically resembles basal cell carcinoma. Less commonly involved sites include ear, trunk, leg, arm, oral mucosa, and salivary glands. It is a component of the cutaneous lesions seen in Muir-Torre Syndrome.

The tumor has multilobulated appearance and may involve the overlying epidermis (as seen here). The individual lobules attempt to recapitulate the architecture of normal sebaceous glands. At the periphery of the lobules are layers of small germinative cells with basaloid appearance.These cells have small vesicular nuclei and scant cytoplasm. They merge towards the center of the lobules with more mature appearing sebaceous cells containing abundant pale-staining foamy cytoplasm and small hyperchromatic nuclei. At least half of each lobule in sebaceous adenoma consists of mature sebaceous cells. Increased mitotic activity is sometimes seen in sebaceous adenomas and should not be over-interpreted as sebaceous carcinoma.