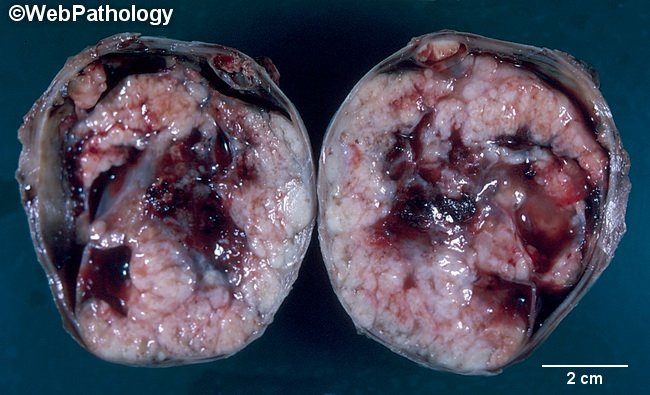 Comments:
Most clear cell tumors of the ovary are clear cell carcinomas (CCC). Benign and borderline lesions comprise < 10% of ovarian clear cell tumors. CCC make up approximately 6% of surface epithelial ovarian cancers. There are marked geographic difference in their prevalence. In Japan, CCC accounts for about 25% of epithelial ovarian cancers. They frequently arise in the setting of pelvic or ovarian endometriosis. Some cases are associated with Lynch syndrome (germline mutations in MSH2 gene). CCC are no longer considered to be mesonephric-derived and it is now believed that they are müllerian in nature. Most are diagnosed between 5th and 7th decades. They may be associated with paraneoplastic hypercalcemia and venous thromboembolism. CCC with identical morphology can also occur in the endometrium, fallopian tube, cervix, and vagina. Grossly, they are generally large unilateral tumors that may be solid, solid and cystic, or predominantly cystic with solid yellow-brown polypoid nodules protruding into the lumen. The cyst lumen contains serous or mucinous fluid or chocolate-colored material (if the tumor arises in an endometriotic cyst as shown in this image).