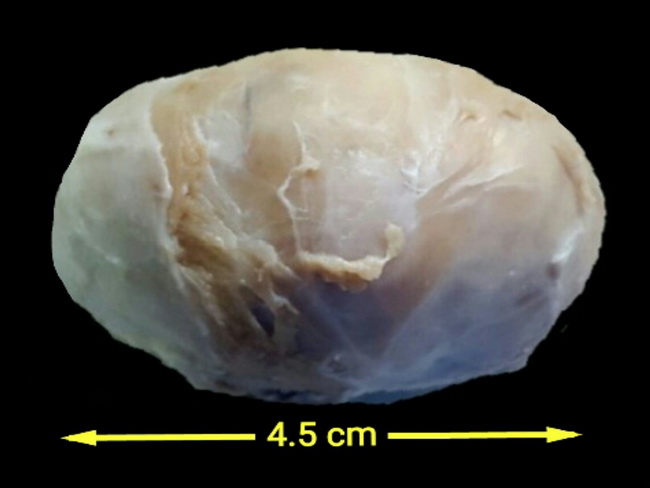 Comments:
Many patients with cardiac rhabdomyomas remain asymptomatic. Larger tumors may obstruct blood flow or impede the motion of valve leaflets causing cyanosis and heart failure. Some tumors interfere with the conducting system resulting in arrhythmias which can cause sudden death. In fetuses, the tumors may be discovered due to hydrops, arrhythmias, family history of tuberous sclerosis, or a cardiac mass noted on routine prenatal ultrasound. In early infancy, cardiac rhabdomyomas can cause intense heart murmur. Rhabdomyomas can occur anywhere in the heart but the most common locations are the ventricles and interventricular septum. Atria are less frequently involved. Grossly, cardiac rhabdomyomas are well-circumscribed, gray-tan nodules ranging in size from microscopic to several centimeters. They are usually multiple, especially in the setting of tuberous sclerosis. This image shows a large rhabdomyoma resected from the atrium of a 1 y/o male. Image courtesy of: Dr. Jose Bellasai, Professor of Pathology, Univ. National & Univ. Catholic of Asuncion, Paraguay.