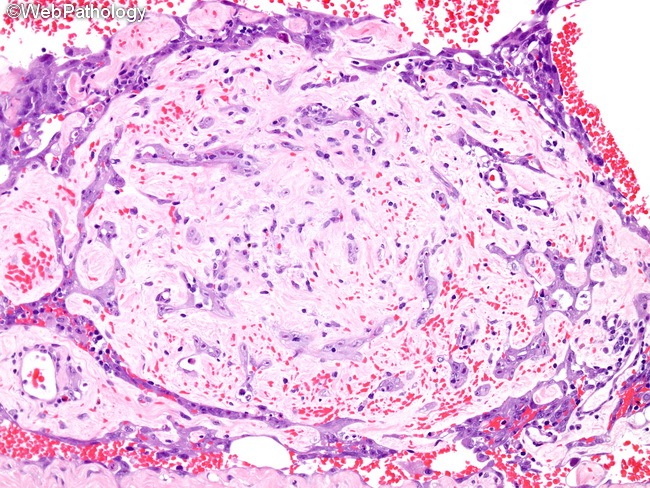 Comments:
Treatment of Angiosarcomas: Wide surgical resection with negative margins is the mainstay of treatment for localized tumors. Given the multifocality of these tumors and the fact that malignant vascular channels often infiltrate dermal planes beneath an apparently normal skin, it is difficult to estimate the tumor size (and decide the margins of resection).

The increased use of Mohs surgery or preoperative use of grid-pattern biopsies has allowed better delineation of the tumor extent, helped in treatment planning, and reduced recurrence rates.

Surgical resection is usually followed by adjuvant radiation. Metastatic angiosarcoma is treated primarily with cytotoxic chemotherapy consisting of anthracyclines, ifosfamide, and taxanes (which have anti-angiogenic activity). Newer approaches include the use of tyrosine kinase inhibitor sorafenib which targets VEGFR signaling pathways.

This image is from a cutaneous angiosarcoma of the leg from an 85 y/o man. The tumor showed numerous large papillations composed of high-grade tumor cell nests embedded in a hyaline matrix and lining the walls of gaping vascular spaces which were themselves lined by highly atypical endothelial cells (see next two images).