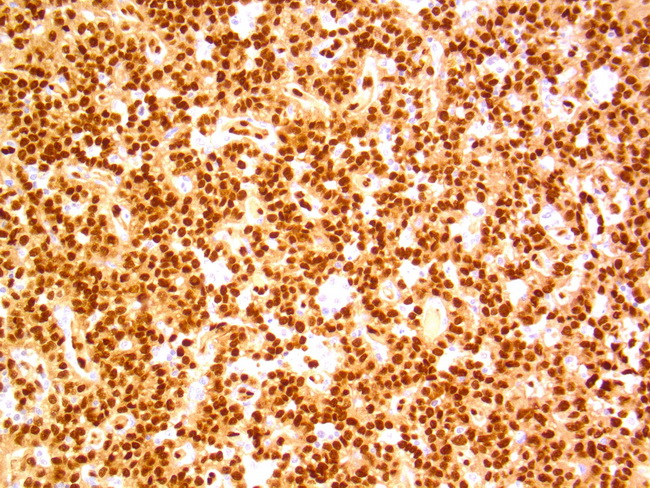 Comments:
Immunohistochemistry of Angiosarcomas: Tumors suspected of being angiosarcomas should be assessed with a panel of endothelial markers, including CD31, CD34, FLI-1 and von Willebrand factor (factor VIII-related antigen). CD31 & CD34: CD31 and CD34 are useful in the diagnosis of angiosarcomas of all grades. CD31 (platelet endothelial cell adhesion molecule; PECAM-1; shown here) is more sensitive and more specific marker of endothelial differentiation than CD34. CD34 is not only seen in angiosarcomas and Kaposi sarcoma, it is also expressed by other soft tissue tumors such as epithelioid sarcomas. One word of caution - CD31 is expressed by histiocytes in a granular membranous pattern. FLI: It is a nuclear transcription factor that is expressed in almost 100% of vascular tumors. The immunohistochemical findings must be interpreted in the context of H&E features since this marker may also be expressed by adenocarcinomas and melanomas. ERG: It is an ETS family nuclear transcription factor and a good phenotypic marker of endothelial differentiation. It has been found to be a highly sensitive marker for benign and malignant vascular tumors (hemangiomas, lymphangiomas, hemangioendotheliomas, Kaposi sarcoma, and angiosarcoma). However, ERG expression can be seen in ERG gene-rearranged tumors, such as 40-50% of prostate cancers and 10% of Ewing sarcomas. ERG is also positive in 50% of Epithelioid sarcomas. Claudin-5: It is a tight junction protein expressed by endothelial and some epithelial cells. Vast majority of angiosarcomas and Kaposi sarcomas expressed claudin-5 in contrast to only 5% of nonvascular mesenchymal tumors. Epithelial markers: Tumors with epithelioid morphology may express keratins and EMA. This image shows strong ERG immunoreactivity in angiosarcoma. Image courtesy of: Brendan Dickson, MD, Dept. of Pathology, University of Toronto, Ontario, Canada; Used with permission.