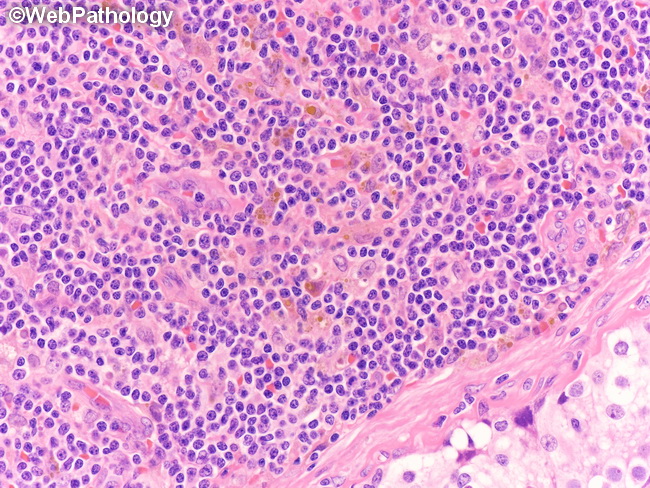 Comments:
Large B-cell Lymphoma of the Testis in a background of CLL/SLL (same case as the previous two images): The image shows higher magnification of the CLL/SLL component. An atrophic seminiferous tubule is partially visible in the lower right. Flow Cytometry: Two populations of kappa light chain-restricted B-cells were found. About 80% of B-cells had immunophenotype compatible with CLL/SLL (CD19+, CD20 dim+, CD5+, CD23 variable+, and kappa dim+). The remain 20% of B-cells were intermediate-to-large size with the following profile: CD19+, CD20 mod+, CD5-, CD23-, CD10+, and kappa mod+. CD38 was positive in 30% of cells suggestive a relatively unfavorable prognosis in CLL/SLL. The final diagnosis was: Large B-cell Lymphoma in a background of CLL/SLL. This may be a composite lymphoma (a CD10+ large B-cell lymphoma along with a co-existing CLL/SLL) OR a progression/transformation of CLL/SLL.