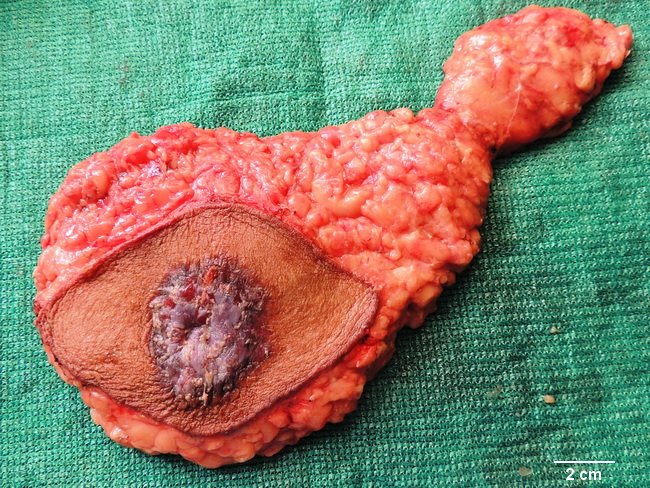 Comments:
Treatment of Paget Disease (PD) of Breast: Given that mammary PD is almost always associated with in-situ or invasive breast cancer, the standard treatment until recently was mastectomy with or without axillary lymph node dissection.

In patients without a palpable breast mass and no evidence of a tumor on imaging studies, a conservative approach consisting of excision of nipple-areolar complex followed by radiation therapy is recommended. Patients with a palpable mass are offered sentinel lymph node biopsy to determine the extent of surgical resection. Any further adjuvant therapy consisting of chemotherapy and/or hormonal therapy depends upon the stage and features of the underlying breast carcinoma.

The image shows a mastectomy specimen with axillary lymph node dissection from an advanced case of mammary Paget disease in an elderly female - same case as the previous two images. A subareolar nodule with DCIS was found in the specimen. There was no invasive tumor.