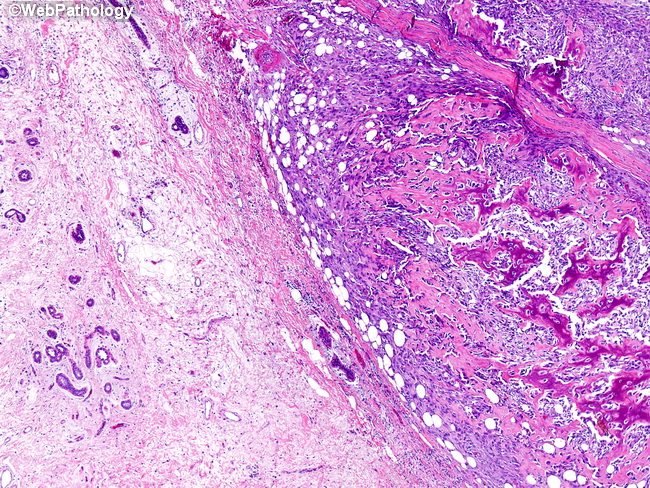 Comments:
Heterologous metaplastic carcinomas of the breast usually contain a malignant glandular and/or squamous component as well as mesenchymal elements such as bone or cartilage. In rare cases, the mesenchymal component differentiates into rhabdomyosarcoma, liposarcoma, angiosarcoma, or other rarer phenotypes. A high-grade spindle cell component resembling fibrosarcoma is also commonly present. Some cases are composed entirely of undifferentiated spindle cells and heterologous elements. Focal myxoid change may intervene between the epithelial and chondroid/osseous elements. Immunohistochemically, heterologous metaplastic carcinomas are negative for ER, PR, AR, and HER2 and generally positive for S-100, p63, and calponin. The tumor shown here has sharply defined border. Normal breast elements can be seen in the left half of the image. The mesenchymal component has an appearance of chondroblastic osteosarcoma.