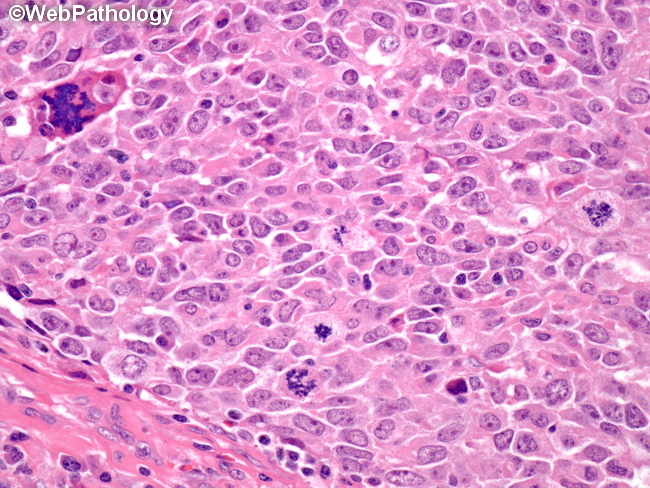 Comments:
Mitotic rate is one of the most important prognostic features in the modified Scarff-Bloom-Richardson histologic grading system. Mitotic figures are counted with 40x objective in 10 consecutive fields (field area of 0.196 sq.mm) with invasive tumor. The selected area should be the most cellular invasive region at the periphery of the tumor where mitotic activity tends to be the highest. It should be away from necrosis, inflammation, areas of calcification and large blood vessels.

It is important to employ standardized counting methods and use fixed field size when assessing mitotic activity to ensure reliability and reproducibility of results. There are tables available listing mitotic rates per 10 HPF for different scores and for different microscopes. Conversion factors have been calculated to convert mitotic counts per 10 HPF to counts per sq.mm.

The image shows invasive ductal carcinoma with high-grade nuclei (score 3), no tubule formation (score 3) and >20 mitoses/10HPF (score 3). This field shows at least four mitotic figures most of which are abnormal.