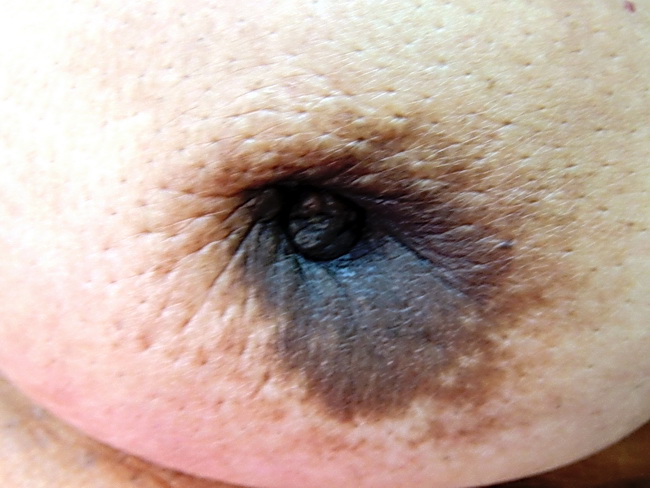 Comments:
Clinical Features: Invasive breast carcinomas detected by population-based screening programs with mammography tend to be small asymptomatic lesions. For those cases that present clinically, the most frequent finding is a palpable breast mass. Other symptoms and signs, including skin retraction, nipple inversion, nipple discharge, change in the size and contour of the breast, change in the color/texture of the skin, and enlarged axillary lymph nodes are less common.

Uncommonly, the patient may present at a much more advanced stage with a large ulcerated fungating mass with skin involvement. Such cases are rare in the developed world due to awareness of the disease and early detection programs with screening mammography. In the underdeveloped and the developing countries, one still encounters such cases on a regular basis.

Case History: This patient (in her mid-fifties) presented with a 1-yr history of a slowly enlarging lump in her left breast. The clinical image shows enlargement of her left breast with nipple retraction and peau d'orange appearance of skin. Examination revealed a hard lump measuring about 6 cm in size. Biopsy confirmed the diagnosis of infiltrating ductal carcinoma.

Breast cancer is one of the many causes of an inverted or retracted nipple. The mechanism of nipple retraction appears to be infiltration of the lactiferous ducts with resultant fibrosis. The involvement of nipple is seen in between 25% to 30% of clinically detectable breast cancers. The tumors are usually located within 2.5 cm of the nipple. Peau d' orange (skin of an orange; orange peel appearance) is due to dermal edema caused by obstruction of the superficial cutaneous lymphatics by the tumor. The infiltrated skin is tethered by the sweat ducts such that it cannot swell, leading to a dimpled appearance.