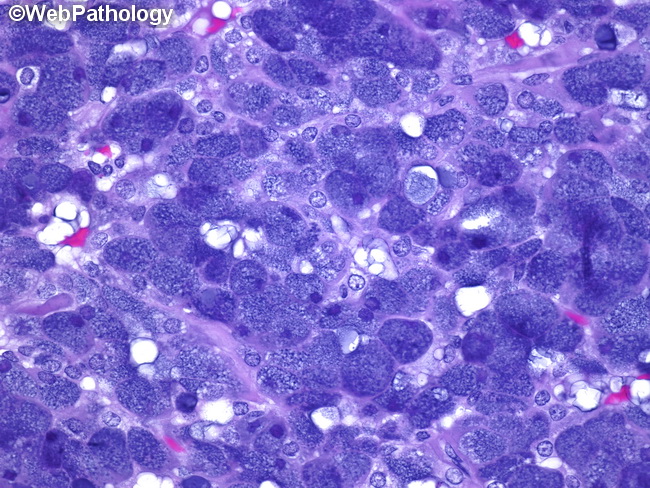 Comments:
Acinic cell carcinoma (ACC) makes up about 6.5% of all salivary gland neoplasms and roughly 18% of all malignant neoplasms of the salivary glands. It shows a wide age range with a peak in the 7th decade of life. It is slightly more common in women. More than 80% of cases involve the parotid. ACC usually presents as a solitary, slow-growing, painless mass. Fixation to the surrounding tissues and facial paralysis are uncommon in the absence of transformation to high-grade tumor (de-differentiation). ACC is the most common malignant salivary gland tumor which may present with bilateral involvement. The cell of origin is believed to be the reserve cells in the intercalated duct system. The tumor cells display a variety of growth patterns such as solid, follicular, microcystic, and papillary cystic. Solid and microcystic patterns are the most common and are often seen together. The image shows acinar cells with deeply basophilic cytoplasm arranged in solid sheets. Intercalated duct-like cells with eosinophilic cytoplasm and vacuolated cells are also seen (higher magnification of the previous image). The basophilic appearance of the acinar cells is due to zymogen-like granules which can be easily discerned at this magnification.