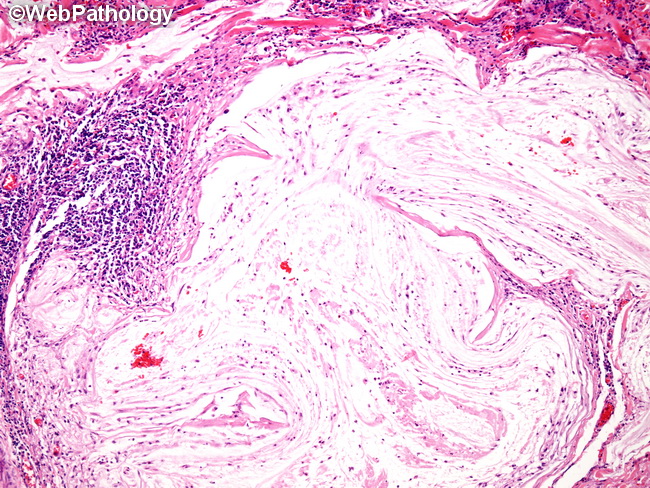 Comments:
About one-third of mucoepidermoid carcinomas carry a translocation t(11;19)(q21;p13) which results in the fusion of CRTC1 gene with the MAML2 gene. This event creates a novel fusion protein that disrupts the Notch signaling pathway. This translocation has been detected in mucoepidermoid carcinomas arising in other organs sites as well such as breast, lung, skin, and cervix. In a small percentage of cases, the partner gene with MAML2 is CRTC3 instead of CRTC1. Earlier reports suggested that the presence of this translocation imparted a favorable prognosis. However, the authors of the original study have recently published an update reversing their stand (MAML2 Status In Mucoepidermoid Carcinoma Can No Longer Be Considered a Prognostic Marker). Notch signalling pathway plays an important role in several key events of normal development such as cell differentiation, proliferation, and apoptosis. Its disruption by a variety of mechanisms such as point mutations or translocations has been implicated in the pathogenesis of many human cancers such as T-cell leukemias, pancreatic cancer, medulloblastoma, and mucoepidermoid carcinoma. This image shows inflammatory response incited by the spillage of mucin into the stroma in a low-grade mucoepidermoid carcinoma of the parotid. When one finds a mucin-filled cystic lesion in the parotid, the possibility of well-differentiated mucoepidermoid carcinoma must be excluded.