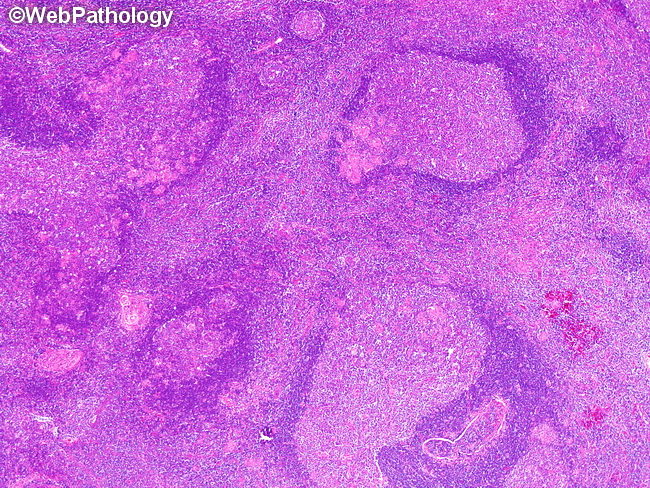 Comments:
Toxoplasma lymphadenitis (previously called Piringer-Kuchinka lymphadenitis) is one of the most common presentations of Toxoplasma gondii infection in immunocompetent adults. It consists of localized lymphadenopathy which may be asymptomatic or accompanied by mild flu-like symptoms such as fever and myalgia. Rarely, there is generalized lymphadenopathy along with hepatosplenomegaly. Posterior cervical lymph nodes are usually involved. Uncommonly, supraclavicular, occipital, or even intramammary lymph nodes may be affected. The involved lymph nodes are painless or slightly tender, moderately enlarged, firm but not rock hard, and do not ulcerate. The lymphadenopathy usually resolves spontaneously within weeks. The image shows hyperplastic lymphoid follicles being encroached by clusters of epithelioid histiocytes (pink areas) from a case of toxoplasma lymphadenitis.