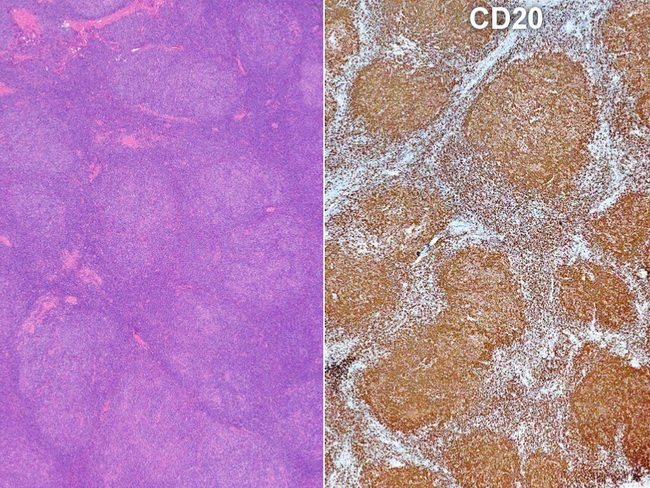 Comments:
Morphology: In nodular lymphocyte-predominant Hodgkin lymphoma (NLPHL), the lymph node architecture is partially or completely effaced by one or more of six architectural patterns (termed A-F) described by Fan and associates (Ref) and explained further in the next image. These patterns are best visualized with a CD20 immunostain. Patterns A and B with B-cell rich nodules are considered typical and make up about 75% of cases. They present with localized disease and pursue an indolent course. Patterns C-F either show a diffuse infiltrate or T-cell rich nodules. They are considered variant patterns and frequently present at advanced stages with liver/spleen/bone marrow involvement, B symptoms, and pursue an aggressive clinical course. Many cases show an admixture of patterns rather than a single, pure pattern. The histologic pattern, especially if it is one of the uncommon variants, should be noted in the report. The image shows nodular pattern (Pattern A) characterized by large nodules composed of CD20+ small reactive B cells, follicular dendritic cell networks, a few reactive T-cells and epithelioid histiocytes, and scattered neoplastic lymphocyte-predominant (LP) cells. The nodules vary in size but are larger than those seen in follicular lymphoma and follicular hyperplasia and lack mantle zones. Reference:Fan Z, Natkunam Y, Bair E, et al. Characterization of variant patterns of nodular lymphocyte predominant Hodgkin lymphoma with immunohistologic and clinical correlation. Am J Surg Pathol 2003; 27:1346-56.