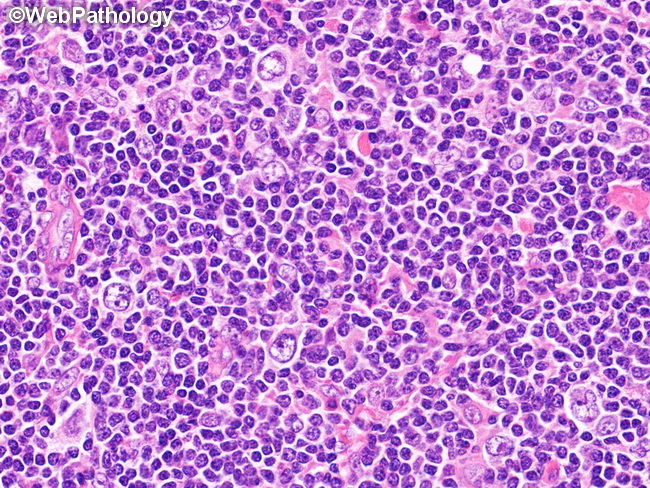 Comments:
Transformation of Nodular Lymphocyte-predominant Hodgkin Lymphoma (NLPHL) to Diffuse large B-cell lymphoma (DLBCL): DLBCL can arise from NLPHL. The rate of transformation ranges from 3% to 14% in various studies. The median time to transformation is 8 years but can be as long as 20 years, necessitating long-term follow-up. Splenic involvement at initial presentation increases the risk for transformation. The mechanism is clonal expansion of LP cells. Some cases of classic NLPHL show nodules of pure population of LP cells. This may represent an intermediate stage in progression. DLBCL arising in the setting of NLPHL can have GC-like or non-GC-like immunophenotype. EBV is absent in NLPHL-related DLBCL. The prognosis is similar to de novo DLBCL and warrants aggressive treatment. In rare cases, patients have initially presented with DLBCL and have subsequently developed NLPHL. This image of NLPHL shows several LP cells with complex, multilobated nuclei (popcorn cells) in a background of small lymphocytes. They have one or more basophilic nucleoli and scant cytoplasm. A few scattered epithelioid histiocytes are also present.