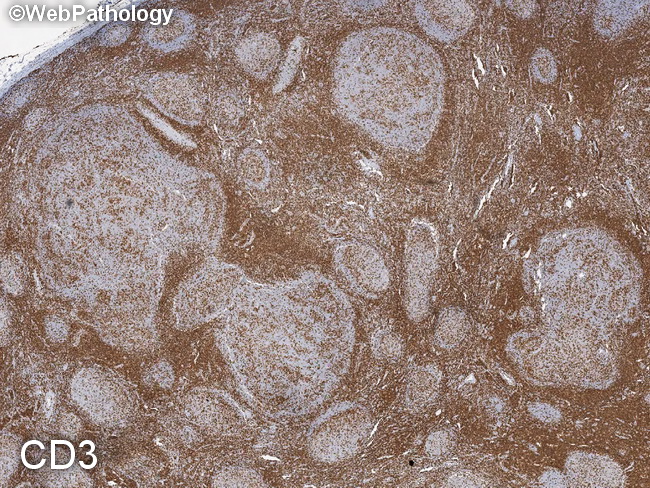 Comments:
Differences between progressively transformed germinal centers (PTGC) and nodular lymphocyte-predominant Hodgkin lymphoma (NLPHL): In PTGCs, the lymph node is not involved totally (i.e. there is at least partial preservation of nodal architecture with associated florid follicular hyperplasia). The nodules of NLPHL are more irregular and have a moth-eaten appearance at low magnification. This is due to clusters of epithelioid histiocytes which appear lighter against a dark blue background of lymphocytes. A panel consisting of pan-B and pan-T cell markers can be helpful in differentiating between the two. NLPHL contains LP cells which show positivity for CD20, BOB1, and OCT2. In addition, CD3, CD57, and PD1 highlight T-cell rosettes around LP cells. Both of these features are absent in PTGCs. This CD3 immunostain shows several PTGCs in a background of follicular hyperplasia. The follicles are composed largely of B-cells (see previous image). There is increased number of T-cell in the interfollicular region.