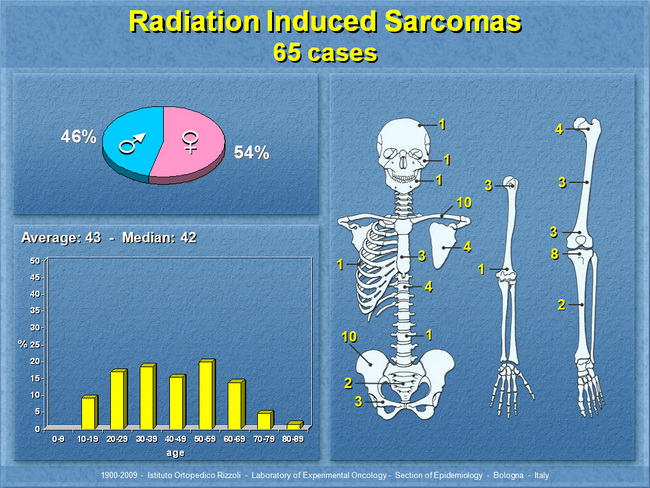 Comments:
Exposure to ionizing radiation increases the risk of developing bone cancer. Young age at the time of exposure and higher doses (especially over 60 Gy) increase the risk of post-radiation sarcomas. The source may be radiation therapy to treat cancer or occupational/accidental exposure to radioactive materials such as radium and strontium which build up in bones. The latent period between exposure to radiation and the development of sarcoma is generally greater than 10 yrs. and may even be several decades. Given the long latent period, post-radiation sarcomas are usually seen in older patients and show a female predominance. Many cases are unresectable as they may involve unusual locations such as clavicle, ribs, scapula, and sacrum - sites that are less commonly seen with conventional osteosarcoma. Slide courtesy of Piero Picci, M.D., Director, Laboratory of Experimental Oncology, Instituto Ortopedico Rizzoli, Bologna, Italy. Used with permission.