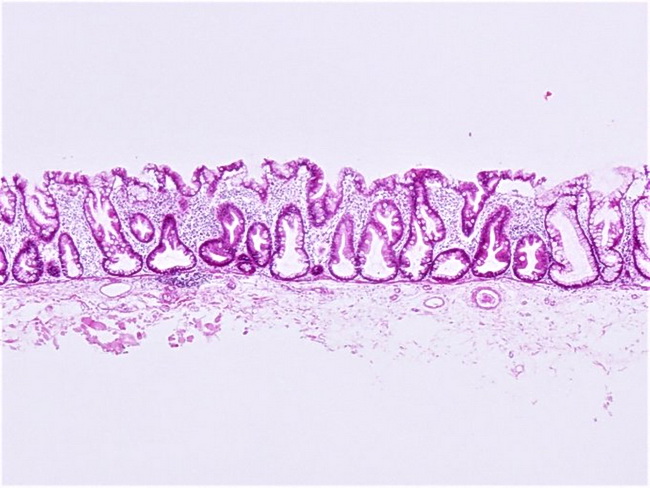 Comments:
Introduction: Sessile serrated adenoma (SSA) (also referred to as sessile serrated polyp) is a relatively new entity that was first described in 1990. SSA is a premalignant lesion and has been linked to the serrated pathway of colorectal carcinoma which makes up about 15% of all colorectal cancers. SSA is more frequent in elderly females and in the right colon. Morphology: SSAs are larger lesions and more common in right colon, unlike hyperplastic polyps which are rarely larger than 0.5 cm and usually found in the rectosigmoid region. SSAs are not peduculated (by definition) and may be inconspicuous on colonoscopy. Microscopic: SSAs show overlapping histologic features with hyperplastic polyps. There is dilatation and/or lateral spread of crypts at the base of the lesion. When sectioned longitudinally, the elongated crypts with their intraluminal folds create a serrated (or sawtooth) appearance. The lining cells are mature goblet cells and absorptive columnar cells which have a basally located nucleus and abundant mucinous cytoplasm. The proliferative zone in SSAs reaches as high as the middle or upper thirds of the crypts. By contrast, the proliferative zone is confined to the lower third of the crypts in hyperplastic polyps. Image courtesy of: @Patholwalker