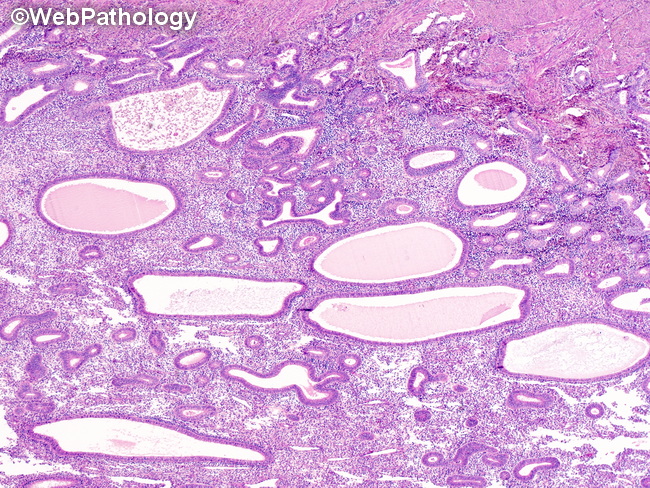 Comments:
Nonatypical Endometrial Hyperplasia (NEH): NEH is characterized by increased density of endometrial glands relative to stroma (gland:stroma ratio >1), best appreciated at scanning magnification. The change is endometrial-wide and generally seen in all fragments at low power. However, there may be regional variations in hormone responsiveness leading to focal or multifocal hyperplasia. The hyperplastic glands may be round and tubular, irregular and branching, or cystically dilated. Despite glandular crowding, there is some intervening stroma usually present, with in a mild increase in gland-to-stroma ratio. The hyperplastic foci merge imperceptibly with non-hyperplastic glands and their cytologic features are similar. Clusters of crowded glands with altered cytology should be absent. The glands are lined by simple columnar epithelium which may appear pseudostratified, resembling mid-to-late proliferative phase endometrium. Cellular polarity is maintained. The nuclei are elongated with evenly dispersed chromatin and indistinct nucleoli. Mitotic activity and number of apoptotic cells may be increased; however, there is no significant cytologic atypia. Tubal metaplasia and ciliated cells are frequently present, distributed in a random fashion. If the patient has received progestins, secretory changes are superimposed on a background of disorganized glands. Mitotic activity decreases and there is decidualization of the stroma.