Intramucosal CA in a Polyp

Intramucosal CA in a Polyp 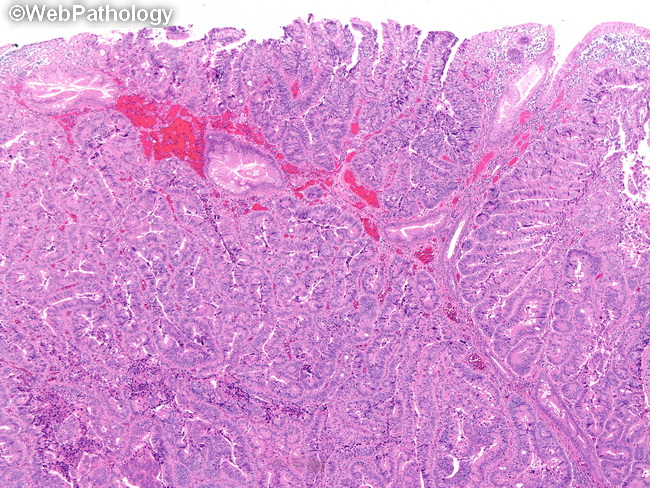 Comments:
The malignant potential of a polyp is directly correlated with three interdependent factors: adenoma size, villous histology, and higher degrees of dysplasia. Only 1.3% of all adenomas smaller than 1 cm harbor cancer. However, villous adenomas smaller than 1 cm show cancer in about 10% of cases. About 40% of all adenomas greater than 4 cm in size harbor invasive carcinoma. Intramucosal carcinoma in an adenomatous polyp is defined as invasion into lamina propria or muscularis mucosae but not below (i.e. submucosa is spared). There is no desmoplastic response (which is usually seen with submucosal invasion). This lesion has no metastatic potential as lymphatic channels are absent in colonic mucosa above the level of muscularis mucosae. Such lesions are considered cured by polypectomy. It has been suggested that both carcinoma-in-situ (intraepithelial carcinoma) and intramucosal carcinoma be reported as "non-invasive carcinoma” to avoid unnecessarily aggressive surgical management. The dysplastic glands on the surface of this adenomatous polyp show a complex architecture. It was diagnosed as intramucosal carcinoma.