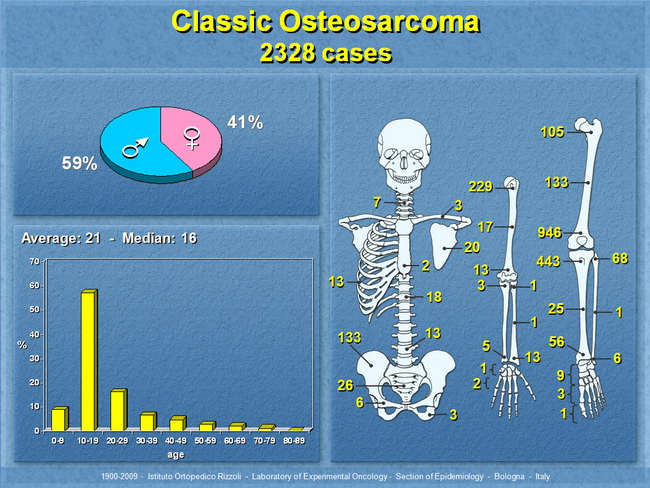 Comments:
The peak incidence of osteosarcoma is seen in the second decade of life with a male predominance. The statistical distribution closely follows the skeletal growth. The greatest frequency of occurrence is seen in bones with the fastest rates of growth such as the long tubular bones of the limbs. When osteosarcoma appears before the second decade, it is often associated with a genetic predisposition such as Li-Fraumeni syndrome (mutations in p53 and CHEK2), Rothmund-Thomson syndrome (mutations in REQL4), or Retinoblastoma (mutations in RB1). When osteosarcoma develops in adults (after the cessation of skeletal growth), there is often an underlying abnormality such as Paget's disease of bone or previous exposure to ionizing radiation. Slide courtesy of Piero Picci, M.D., Director, Laboratory of Experimental Oncology, Instituto Ortopedico Rizzoli, Bologna, Italy. Used with permission.