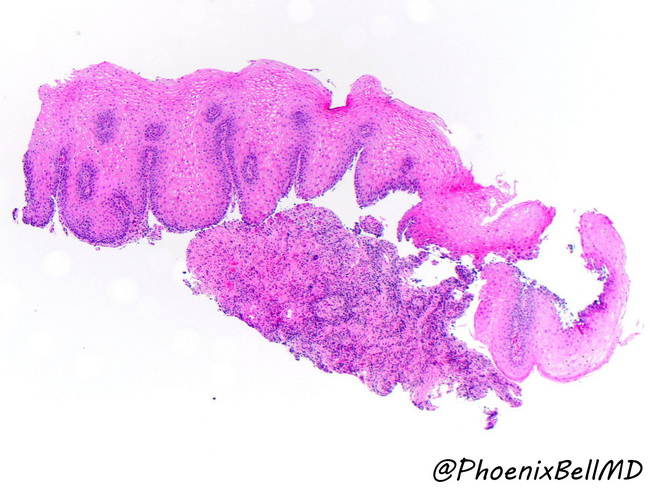 Comments:
Introduction: Cytomegalovirus (CMV) is a member of the Herpesviridae family and the 3rd most common cause of infectious esophagitis (after Candida and Herpes Simplex Virus). In immunocompetent individuals, CMV infection is either asymptomatic or presents as mild mononucleosis-like syndrome. Serious disease typically develops only in immunocompromised states such as patients on chemotherapy, HIV infection, or immunosuppressive therapy following organ transplantation. Esophagitis is the 2nd most common GI manifestation of CMV infection, first being colitis. CMV infection is common in humans. About 70% of the world human populations have latent CMV infection. CMV replication is kept under check in immunocompetent hosts by antibodies against key viral surface glycoproteins, and cell-mediated immune responses carried out by NK cells, CD4, and CD8 cells. Disease in immunocompromised hosts can result from reactivation of the latent virus (most common), newly acquired infection, or reinfection with a new strain. CMV replicates inside a variety of cells, including submucosal endothelial cells and mesenchymal cells. Occlusion of small blood vessels leads to ischemic mucosal injury and ulceration. This image from an endoscopic esophageal biopsy shows inflammatory infiltrate in the submucosa. Viral inclusions are not apparent at this magnification. Image courtesy of: Phoenix Bell, MD.